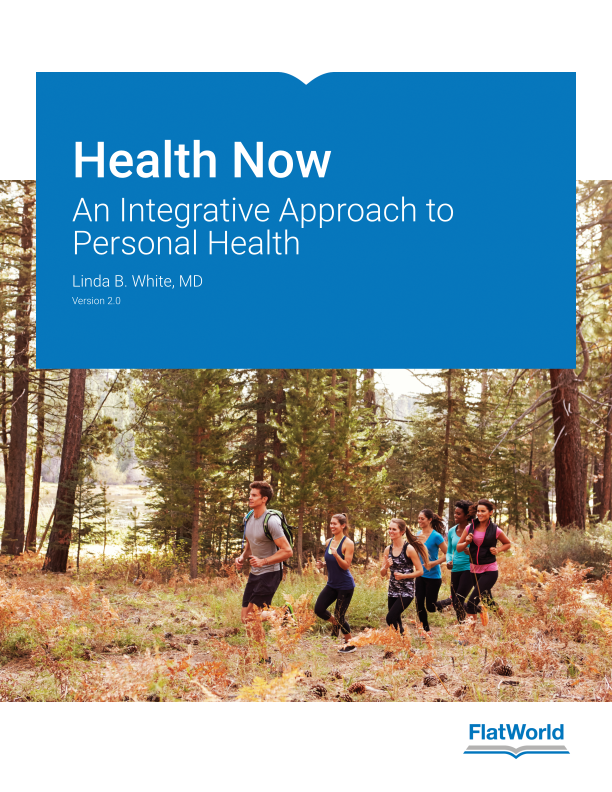 This textbook is suitable for the following courses: Personal Health.

Health Now: An Integrative Approach to Personal Health is an introduction to personal health that presents and identifies lifestyle changes that promote health and wellness and prevent disease. Students will learn how personal habits ripple outward, affecting not only themselves, but also their loved ones and ultimately the local and global environment. Not only will students develop a firm grasp of health basics, but also a health literacy that encourages students to consult credible sources for answers.

Linda Blachly White (MD University of California, San Diego) received B.S. and M.S. degrees in biology from Stanford University in addition to an MD. Following two years of residency training at the University of Colorado in Denver, she taught human physiology for several semesters in the biology department at Metropolitan State University of Denver. Prior to her passing, Linda devoted herself full time to freelance writing, editing, and consulting.
Between 2004 and 2014, Linda returned to MSU Denver and developed and taught courses in the Integrative Therapies Program. These classes include Stress: Physiology, Pathophysiology, and Treatment, Sleep Science, Physiology of Aging, Dynamics of Health, Pediatric Holistic Health, Herbal Medicines, Botanical Pharmacology, and Writing for the Health Professions.
In 1990, Linda published her first book: The Grandparent Book (Gateway Books). She also contributed chapters to Consumer Guide’s The Complete Pregnancy and Baby Book (Publications International, 1987) and Maximum Food Power for Women (Rodale Books, 2001). She coauthored Kids, Herbs, & Health (Interweave Press, 1999), The Herbal Drugstore (Rodale, 2000), and 500 Time-Tested Home Remedies and the Science Behind Them (Fair Winds Press, 2013). In 2010, she worked as a contributing editor for National Geographic’s Complete Guide to Medicinal Herbs and Other Healing Plants. She also was a contributor and advisor for Complete Guide to Natural Home Remedies (National Geographic, 2012).
Linda's articles have appeared in Sesame Street Parents’ Guide, Mothering, Runner’s World, Vegetarian Times, Herbs for Health, Herb Companion, Pediatrics for Parents, Nutrition Science News, Natural Home, Natural Pharmacy, Delicious Living, Nutraceuticals World, Great Life, AllHerb.com, Taste for Life, Remedies, Mother Earth News, and Mother Earth Living.
Linda lectured nationally and internationally, including at the Smithsonian Institute and three universities in Xi’an, China. She appeared on local television as well as CNN and Good Morning, America.