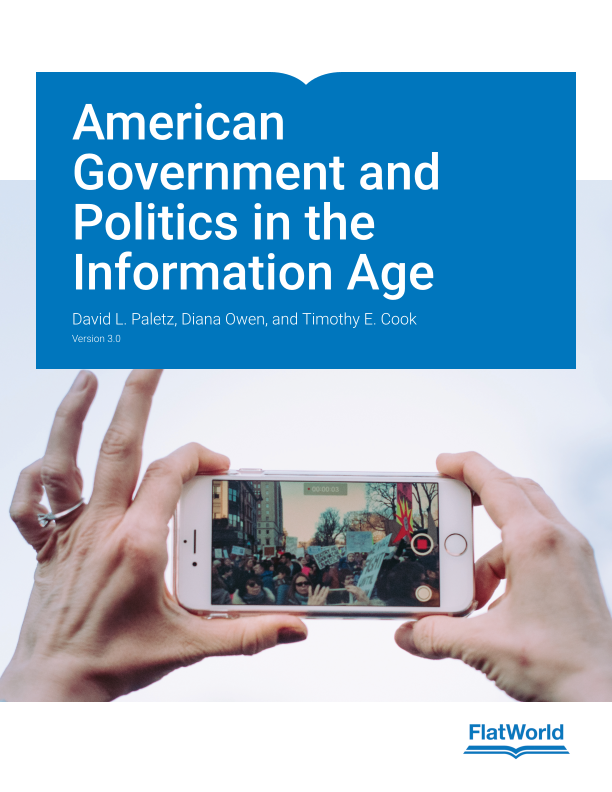 American Government and Politics in the Information Age is a comprehensive and lively introduction to the vital subject of American Government and Politics. Inspired by students’ familiarity with the mass media and fluent use of communication technologies, the authors also connect the book’s subject matter with these media and technologies. They show how the media interact with and depict the American political system; the similarities and differences between these descriptions and the real world of government and politics; and the consequences these interactions and depictions can have for the public, politics, government, and public policies. The authors also show students how the media can help them intervene productively in politics and get things done.

Chapter 18: Appendix A: The Constitution of the United States

Diana Owen (PhD University of Wisconsin) is Professor of Political Science and Director of the Civic Education Research Lab (CERL) at Georgetown University where she teaches in the Communication, Culture, and Technology graduate program. She is a graduate of George Washington University and received her doctorate in political science from the University of Wisconsin–Madison. Diana has been an American Political Science Association Congressional Media Fellow. She is the author, with Richard Davis, of New Media and American Politics (Oxford, 1998) and Media Messages in American Presidential Elections (Greenwood, 1991). She is a coeditor of The Internet and Politics: Citizens, Voters, and Activists (Routledge, 2006) with Sarah Oates and Rachel Gibson; she is a coeditor of Making a Difference: The Internet and Elections in Comparative Perspective (Lexington, 2009) with Richard Davis, Stephen Ward, and David Taras; and a coeditor of Internet Election Campaigns in the United States, Japan, Korea, and Taiwan (Palgrave Macmillan, 2017). She has published in numerous scholarly journal articles and book chapters in the areas of American government, mass political behavior, political communication, media and politics, political socialization, civic education, and elections and voting behavior. Her most recent work focuses on digital media in American elections and the intersection of civic education and political engagement. She is the recipient of a Supporting Effective Educator Development grant from the U.S. Department of Education. She is grateful for the support of her husband of over thirty years, Jeffrey.